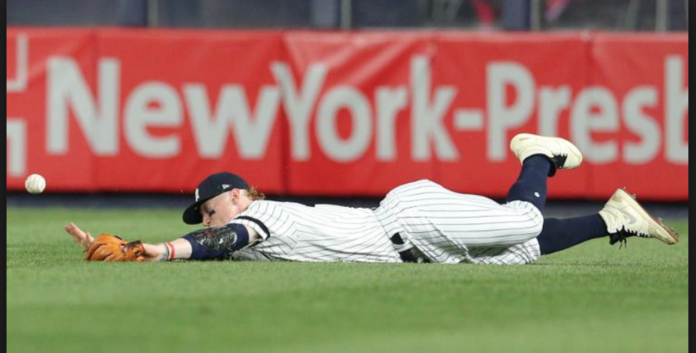 Thunder boomed in the air around the Bronx as storm clouds threatened, at the same time that Clint Frazier (nickname: Red Thunder) gave the game away in a lightning-quick flash.

The Yankees trailed 3-2 in the 7th inning on Sunday (6/2/19) looking to sweep the Sox, but Frazier .. let a single by Eduardo Nunez get by him and roll all the way to the wall for an error, allowing Michael Chavis to score all the way from 1st base. Nunez went all the way to third. Because of that, the Yanks played the infield-in & Brock Holt looped a single that barely got past the infield dirt. Then Andrew Benintendi “singled” in front of Frazier who foolishly decided to dive for the ball, playing it into a double, allowing yet another run to score. On top of that, in the 8th, he misplayed a Chavis pop-fly down the RF line into a triple. The Yankees battled back, as they alway do, scoring 5 runs on the night, but falling short by a final score of 8-5.

After the game Frazier would not speak to the media.

Not a good night for Red Thunder.

Boy oh boy I’ve been saying it all along, C. Frazier can’t field Embarrassing/ball gets by him Cost runs Made DJ make a circus-catch and risk injury on a ball he should have caught Misplayed a ball in front of him Makes wild throw home resulting in another run ALL IN ONE INNING.

It reminded me of a tweet in which I responded to Yankees beat writer Bryan Hoch all the way back on Feb. 24th 2018 :

Great recovery more than a Great catch. Got a late break on the ball, then turned the wrong way ..but to his credit made an acrobatic catch. I’ve seen Frazier take odd/wrong routes numerous times. imo- “legendary bat speed” but really needs to work on improving his defense. https://twitter.com/BryanHoch/status/967476309067812865 …

The thing that makes that tweet significant was that I was pointing out that Clint Frazier didn’t make a great spring training game catch , but actually a great recovery of a bad read on a relatively routine deep fly ball. He took a step in, then went back, then turned the wrong way, then made an acrobatic catch. Unfortunately on the play, he hit the ground hard when he fell, and hit the back of his head on the warning track. That sadly was one of the misplays that led to serious concussion symptoms that lingered for much of last season.

I really felt bad for Clint Frazier out there vs. the Red Sox, but he is, and always will be, a defensive liability. It’s got me .. SEEING RED.