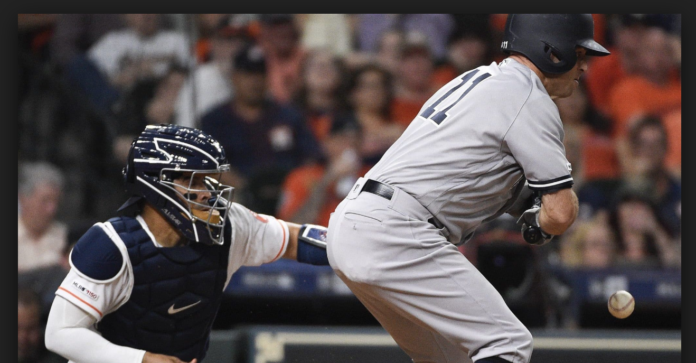 The picture attached to this post is that of Brett Gardner bunting the ball with no-one out, runners on 1st and 2nd vs. the Astros .. and not running out-of-the-box. The result was an easy 2-6-3 double play to blow-up a promising rally. Twitter erupted, blasting Gardner for his bone-head play, and rightfully-so. But I had a slightly different take, and an even deeper frustration. The bunt itself was a lousy bunt. It went only a few feet out in front of the plate.

Of course I was angry by the lack of hustle out of the box, but I was more frustrated with the fact that Brett Gardner has been in the league for 12 seasons with the Yankees and is not a good bunter. He had absolute-blazing speed when he came up in 2008. How can it be that he did not perfect the art of bunting ?? Can you imagine what kind of tool that would be for him?? Gardner has a lifetime .260 BA (.190 this year), which is way too low for someone with his kind of speed. It makes no sense not to be able to push the ball down 3rd, or drag the ball down 1st if you have crazy-speed. Mickey Mantle, one of the most feared HR hitters in the history of the game was an excellent bunter. He would not have won the Triple-Crown in 1956 if he hadn’t won the batting title, and he wouldn’t have won the batting title had he not beat out 12 bunts during that season.

Brett Gardner has put together a good Yankee career, has a WS ring to go with a Gold Glove, but he never fully ….. developed.

He never took full advantage of his God-given abilities. He needed to develop ..his bunting skills, he needed to develop ..his ability to read a pitchers pick-off move when he was a base-runner, he needed to develop .. a level swing instead of an uppercut swing. The Yankees developmental coaches /programs need to take part of the blame. If they didn’t make a better small-ball player out of Brett Gardner, and his skill-set, how can we expect them to do it with a slugger, or anyone else for that matter ?? Will the Yankees become aware of this deficiency or will they continue to be a one-dimensional offense who lives and dies by the long-ball?? Let’s hope this is a .. developing story.