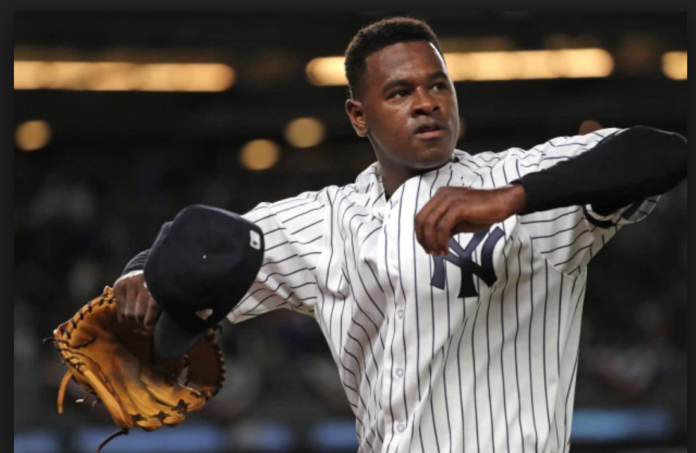 It was an ugly loss. It was an embarrassing loss. It was a concerning loss. It was a lopsided loss .. but it only counts as one loss. The Yankees were pummeled 15-7 by the Red Sox at Fenway Park to start a crucial 4 game series (Aug 2 – Aug 5), falling 6 1/2 games behind the 1st place Red Sox . Besides the deficit in the standings, the other big concern is that the Yankees are facing their first crisis of confidence since the season started, with a rookie manager Aaron Boone who has to deal with injuries  and more importantly, sloppy /uninspired / fundamentally-unsound play lately. And then there are the concerns for Luis Severino. He has had 4 sub-par starts in a row, after his first 18 starts were Cy Young-worthy. Severino’s start on Friday night in game 2 becomes enormous. You can’t overstate the importance of the game both for the Yankees and Severino personally. Over his 4 most recent starts Severino has thrown 19.1 innings, allowed 7 HRs with a 8.84 ERA. His first 18 starts : 118.1 innings, 6 HRs, with a 1.98 ERA. If Sevy goes out and dominates Boston as he did back on July 1st in the Bronx when he went 6.2 inn , allowing only 2 hits and no runs, it will wash away a lot of the sting of the game 1 beat-down. It will also calm some of the fears that he is not 100% healthy. But if Severino gets knocked around for 6 earned runs in 5 innings or less (as he has in his last 2 starts) then real concerns will set in. The question will become .. is there something physically wrong with his elbow? shoulder? back? Is it just a tired arm from the work load of last year? One thing I do know, Luis Severino has gotten away from the formula that made him a Cy Young candidate last year. For the entire 2017 season Severino stayed committed to throwing his change-up as a third pitch. This year he started out in his first 2 games (vs Toronto & Tampa) throwing all FBs & Sliders. He abandoned the c/u, and was able to win both games. But the same 2 pitch mix didn’t work vs. the Red Sox in his 3rd start when the Yankees lost 14-1 and he went 5 innings & gave up 8 hits and 5 earned runs. After that game Sevy went on a long stretch where he went back to being a 3 pitch starter. He did this all the way up to the July 1st game when he memorably struck out JD Martinez in a key spot with back-to-back change-ups. He mentioned  in the postgame that night that the change-ups to Martinez were the keys to the game. After that game he had a 1.98 ERA. Since that game his velocity has been down slightly and he has not had that wipe-out Slider with the consistent downward tilt. He also abandoned the c/u once again and his ERA is now 2.94 The bottom line is Severino needs to understand that he has to stay committed to a 3 pitch mix. One more point about the change-up, something I have mentioned over & over, the quality of the c/u must improve. The velocity needs to be dialed back to 85 mph not 89-90, and that pitch also needs to be down in the zone with late life (sink & fade). There are going to be games and stretches of the season that either the FB or Slider will not be electric, and you can’t get by on just one pitch. I will sum it up this way .. Luis Severino is a great flamethrower but also needs to be a consistently great pitcher. Without question Sevy is the Yankees ace. Pitching win Championships, and without their ace, the Yankees  are going nowhere. Even if he does mix his pitches, we still have to hope that he is not hiding a tired-arm, or worse, an injury due to work-load. We will find out soon enough with so much on the line . We need Sevy to ..