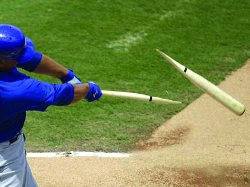 Going back to 2008 it has been a strong opinion of mine
that MLB and the Players Union is making a big mistake,
allowing hitters to use bats made from Maple wood.
For years the wood of choice was Ash wood, and
when it breaks, it splinters, but stays in one piece.
The Maple bat breaks apart, and the bat head, or at
the very least the shard of a broken bat, becomes a
flying projectile.
But MLB still allows both Ash & Maple bats to be used.
Why is the Maple bat allowed to be used?
Because it is harder wood than Ash, and when the ball
is hit it goes further. More Home Runs are hit. You get
the picture. It’s always about the almighty buck.
Last night at Fenway Park, a woman in the stands was hit by a
a part of a flying broken bat, and the result is she
sustained life threatening injuries.
When the batter Brett Lawrie of the A’s was asked what type
of bat it was that shattered ?

My thoughts and prayers go out to this woman and her family.
Hopefully the horrific incident creates a change in thinking
at the Commissioner’s Office and with the Players Union.