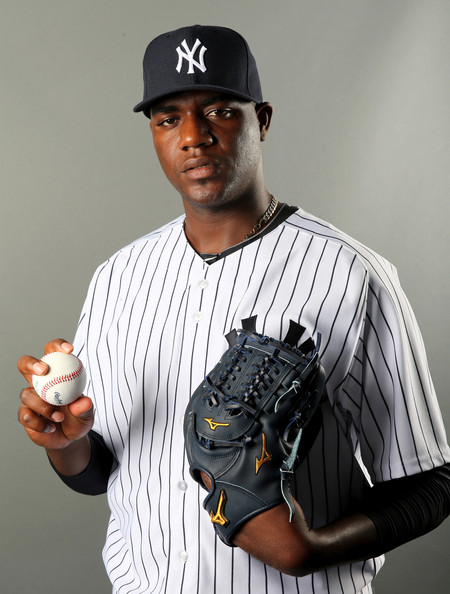 Back in 2012 when the Yankees traded for Michael Pineda, I could hardly wait to see

him pitch in spring training. I was excited to watch the young super-talent, but also

in the first half of his rookie season.

Reason for my concern …. the 6′ 7″ right hander showed diminished velocity in his final start

of the 2011 season for the Mariners after struggling for the entire second half.

I was concerned Brian Cashman might have traded for damaged goods.

I HAD .. the “knick” name picked out for him back then on twitter  ” #PINSANITY ”

BUT HE HAD … a torn labrum in his pitching shoulder,

Did the G.M. of the Mariners Jack Zduriencik know he was trading damaged goods ?

Who knows.. who cares. What does matter is that shoulder surgery is very tricky.

It’s not like Tommy John elbow surgery. If you come back (and stay back) from shoulder surgery,

you really beat the odds.

Well the surgery is behind him and after finishing the 2014 season strong,

impress & jump off the page …

Pineda has been dominant and yet economical at the same time.

His 85 mph Slider …is his out pitch, nearly un-hittable, and possibly the best in the league.

but threw with success and confidence this Spring. It give batters a third pitch to have to

look for, at a different speed, and it’s movement goes the opposite direction of the FB & Slider,

which move towards his glove side corner of the plate.

All of his pitches have movement and late life in the zone which is also key.

* the Mets try to take over the town

I figured, why not try it again, and say …

#PINSANITY IN PINSTRIPES as a matter of fact.